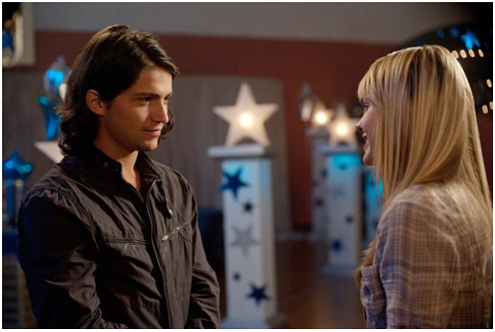 The thing that I most remember from my prom is not the mediocre food, the ugly dresses, or even the general awkwardness of the whole affair. It is, instead, the part where we all waited to go into the reception hall where the prom was held. Because while most people arrived on time and somewhat inconspicuously in their limos and cars, one large group of students (who I will immaturely refer to as the “popular” people) pulled up in front of the entire graduating class, after everyone else had arrived, in a giant, noisy party bus. They then proceeded to individually exit said bus. Each one got their drunken, wobbly moment to shine. And for some reason, everyone felt obligated to actually give them the satisfaction of watching.

So when the impeccably coifed teens in Disney’s Prom repeatedly waxed poetic on how prom “brings people together” and how “for one night, it doesn’t matter who you were during for the past four years”, you’ll have to excuse me if I snickered a little. And a good portion of Prom is equally as naive and trite as those baseless pronouncements. But as flawed as the film may be, I still found it enjoyable on some strange level.

The plot of Prom is somehow both overly complicated and mind-numbingly simple. The main character, Nova (because apparently that’s a name now), played by Aimee Teegarden, is the up-tight, overachieving head of the prom committee. And by a string of events that literally make no sense, the school “bad boy”, Jesse (played by a young Johnny Depp Thomas McDonell) is roped into helping her prep the school gymnasium for the social event of the year.

Along the way, a smattering of Nova’s friends get their own underdeveloped storylines about finding dates for the prom, and a couple of charming underclassmen, Lucas and Corey (Nolan Sotillo and Shameless’ Cameron Monghan), put their friendship to the test when one of them pursues a blandly attractive classmate, Simone (Danielle Campbell).

Does this sound familiar? Does it perhaps remind you of 1999’s 10 Things I Hate About You? Well, I would not blame you at all if it did, because they are basically the same movie. Teegarden, McDonell, and Sotillo are all sighs and sass while they do their best Julia Stiles, Heath Ledger, and Joseph Gordon-Levitt impressions, respectively, but none of them achieve anything nearly as lively as the original trio managed to. Teegarden is grating (as she is on Friday Night Lights) thanks to her unrelentingly affected acting style, while the two male leads here are vaguely charming but ultimately forgettable.

The one cast member who stood out to me (and not merely because of his towering stature) was Nicholas Braun. As the charmingly awkward character of Lloyd, Braun (who coincidentally played the Joseph Gordon-Levitt role on the ill-conceived TV update of 10 Thing I Hate About You) has a natural sense of humour that shines through on screen. Lloyd is disconnected from the rest of the characters, and his scenes play out almost like short comedy sketches. In fact, that self-contained comedic character was the one thing in Prom that harkened back to some of the classic 1980’s teen movies. Think of the paperboy in Better Off Dead or Long Duck Dong, the family’s exchange student in Sixteen Candles, and you’ve kind of got Lloyd. Thanks to Braun’s easy charisma and some fairly successful situations that the writers constructed for him, Lloyd was one of the saving graces of Prom.

That’s not to say that the rest of the film is worthless, though, because it’s actually better than I had expected. To start with, I have to give the filmmakers credit for largely avoiding easy pratfalls and gross-out humour. And while yes, there is a lot of truly cheesy dialogue (at one point a character earnestly states, “And now I am in this tree…and you’re beautiful.”), there are also some moments that turn out more charmingly than they have any right to. Lucas and Corey’s unfettered love of rock music strikes a familiar note for any semi-outsider who signed their lives over to music during high school, and the underused character of Rolo (a typical “stoner” character, minus the pot) comes out with some legitimately strange, fascinating, and witty observations (and creates a pretty awesome Facebook profile picture along the way).

Prom builds momentum as it goes, and by the time the kids actually get to the dance, somehow I kind of found myself caring about it all. The movie is clearly aimed at pre-teen girls who are yet to experience their own proms (and thus may not realise how unrealistic everything in the movie is), but it’s kind of a fun ride along the way. Much like the occasion that it’s named after, Prom is a perfectly pleasant experience if you leave your expectations at the door and just go along for the ride.