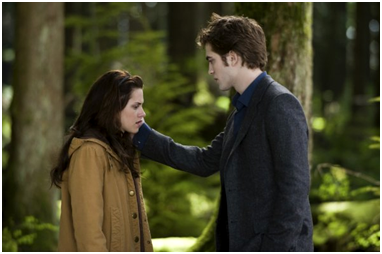 I’ll admit, I’ve read all the books. While I enjoy them, I think I have a decent perspective on what they are. Call it a guilty pleasure, if you want. It’s not great literature by any stretch, and anyone who says those books are well-written is delusional. But I won’t begrudge those who like the series and get excited for the movies. I thought the first movie, last year’s Twilight, was better than many people gave it credit for, but still a flawed movie. So I wasn’t sure what to expect with this one, with their new director and bigger budget. Here’s what I thought:

The Twilight Saga: New Moon begins with Bella Swan brooding (as usual) on her 18th birthday because she is now officially older than her vampire boyfriend, Edward Cullen (except that he’s actually 100+ years old and trapped in a 17-year-old boy’s body. Creepy? Yes.). At the birthday party that the Cullens coerce her into having, Bella gets a paper cut while opening a gift, and her blood sends the Cullens into something of a frenzy (side note: it seemed like an awful lot of blood for one tiny paper cut, didn’t it?). Shaken up by this close-call, Edward leads her deep into the forest and tells her that they can no longer be together, and that he is ostensibly leaving forever. A few months pass, and Bella apparently never moves from her perch by her bedroom window. She finally gets up the courage to face the world boyfriend-less (I’ll save my rant for another time), and finds a companion in her newly ripped friend, Jacob Black. Bella discovers that doing dangerous things causes ghostly apparitions of Edward to appear, and this causes her to do a number of incredibly idiotic, dangerous things in order to see his face. Meanwhile, Jacob’s going through some tough times himself, since he’s just now finding out that he happens to be a werewolf. Cue the budding romance, brooding gazes, abs, and suicide threats.

If you enjoyed the books, you probably won’t mind the sillyness of this movie. Anyone else will likely be really confused as to why this franchise is so popular. But as ridiculous as it all is, there is something there, obviously. I’m not going to go into some pseudo-psychological deconstruction of it all. I just know that it’s shamefully enjoyable. A lot of the fun comes from Robert Pattinson (who plays Edward, if you somehow weren’t aware). All of his theatrical brooding is beyond over-the-top, but he does have a weird magnetism on the screen. Am I saying this because I’m an 18-year-old girl who finds him attractive? Probably. But he does bring a boatload of charisma to the movie just by dopily gazing into space. He and Kristen Stewart, who plays Bella, have some decent onscreen chemistry, and while her stilted delivery is easy to mock, it works pretty well for the character.

Taylor Lautner (Jacob) may be one giant hunk of eye candy (there were a few cheers in my theatre when he made his debut), but he comes across as surprisingly bland. I doubt that many of the people going to see this movie really care about his acting, but any time the role called for an emotion that wasn’t “jovial”, things took a turn for the worst.

The special effects are also much better. Now, when Edward Cullen steps into the sunlight, the special effects are just laughably silly, rather than laughably silly AND awful. The werewolves (though rather underused) come across much better than the trailers suggested. That whole, weirdly aquatic atmosphere of the first film is still here somewhat, but new director Chris Weitz wisely tones it down a bit.

I really could have done without the three segments of the film that involved lengthy 360-degree camera shots revolving around the characters (two of which were only minutes apart). I get that Bella is disoriented in a world without Edward, but I don’t need to feel like I’m watching Cloverfield in order to understand that.

I always liked the Bella/Jacob bond in the book, yet I felt like the pacing of that section of the movie (which was the entire middle part of the film) was all over the place. Things got more interesting in the last half hour of the film, when Bella goes to Italy and meets the Volturi (some kind of law-enforcement vampires?). Michael Sheen and Dakota Fanning are so much fun as two of the sinister vampires, and really elevate the film far beyond anything that happened in the first hour and a half.

It’s not by any stretch a good film, but you can have a lot of fun at New Moon, if you’re willing to go along with it. Even the audience at my screening, who seemed legitimately interested in the movie, burst into laughter at a random shot of Edward Cullen running through the woods in slow motion. I laughed at New Moon, but I did ultimate find myself getting absorbed in the story. Not as much as I did with the first one, but it was still an enjoyable, if not largely flawed, film.

I’ve seen some great movies from this year so far (even though there are scads that I wanted to see that I missed out on in theatres). And by the looks of things, there are plenty of other really promising films still to be released. “Oscar season” is pretty much in full swing now, so you can expect some of the best movies of the year to be released in the next couple of months. Here’s a look at some upcoming films that I’m excited for. I probably won’t end up seeing many of them in theatres, though (especially since so many are in limited release). My local theatre is generally a piece of crap and never gets anything other than dumb comedies, kids’ movies, and blockbuster horror/action flicks. Though I was pleasantly surprised when it belatedly got (500) Days of Summer (but the theatre was pretty empty when I went on the first night they had it, so I guess that doesn’t really encourage them to get more of those types of movies). But it’s just nice to know what’s out there, even if I’ll have to wait a few months to see it.

This trailer seems to follow me to whatever movie I see in theatres. But unlike the trailer for I Love You, Beth Cooper, I don’t get angrier and angrier every time I see it. Rather than making me want to throw something at the screen, it makes me want to get up and do something epic (I’m not sure what, exactly, though). It seems to have a fun, carefree spirit to it (a la Almost Famous), and Phillip Seymour Hoffman is the MAN.

Other Releases of interest:

I know, I know. It just looks fun, okay? While the first film wasn’t great, I didn’t think it was as bad as most people did (I’d give it a 6/10). I’m embarrassed to admit that I’ve read all four books, and this one was probably my favourite (I was always rooting for the doomed Bella/Jacob romance). One of my best friends is a big fan, so I’m planning to go with her to see it.

November 25
Me and Orson Welles (Limited) 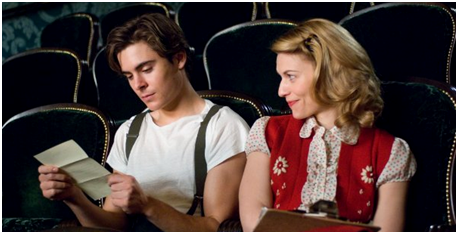 (What a shamelessly swoon-inducing Zac Efron photo!) I’m in the camp that believes that, deep-down, Zac Efron is actually a talented actor. The trailer looks better than I’d expected, and it seems to have a fun, screwball vibe to it.

December 4
Up in the Air (Limited; wide release December 25?)

I can’t stand George Clooney, yet I was at The Men Who Stare at Goats last night. Logically, they had the trailer for Up in the Air playing beforehand. I’d been split on this movie. I’m a huge Jason Reitman fan (Juno and Thank You For Smoking are two of my favourite films of the decade). His films capture this feeling that I feel, but have never been able to convey in anything that I’ve said, written, or done in my life. Yet, I was convinced that Clooney wouldn’t be able to get that feeling across, and would ruin the movie. But after seeing that trailer last night (I’d seen a different online that hadn’t done too much to convince me), I’m so excited for this movie. It looks just as good as Reitman’s other films, and for once, Clooney seems to have an earnest and honest on-screen persona.

I find the premise of this film fascinating, and the trailer is exciting, suspenseful, and artistic. As if that weren’t enough, the cast is superb (Colin Firth, Julianne Moore, Nicholas Hoult, Matthew Goode, Ginnifer Goodwin). I like that it doesn’t seem like your typical Oscar bait film (while Invictus looks good, it could probably be accused of that), yet it’s still getting decent buzz already. From what I can tell, it looks like my kind of movie.

Did You Hear About the Morgans? (This will likely turn out to be terrible, but Hugh Grant is the king of romantic comedies, and the trailer had a couple of genuinely funny moments)

I’m excited to see Daniel Day-Lewis sing. It’s got a great cast, and a director who’s had success with this kind of project before (even though I didn’t like Chicago much). Perhaps my interest has waned slightly, but that’s only because there are other films that look great, which are starting to steal my attention away from this one (An Education, A Single Man, Up in the Air)

With all the serious, Oscar-grabbing films out there, nothing could be more welcome that a big fun, exciting Christmas movie. I feel like I talk endlessly about how awesome Robert Downey Jr. is, but it can’t be said enough times. I saw the poster up for this one last night, so I know that my movie theatre is getting it. You can be sure I’ll be dragging whoever will go with me to see it.

The Imaginarium of Doctor Parnassus (Limited)

Let me know what you think of my choices. Have you seen any of these at TIFF or other film festivals? Do you think I’m wasting my time with New Moon (okay, even I know that the answer is “yes”)? What movies are you excited for?