Review: Sorry to Bother You 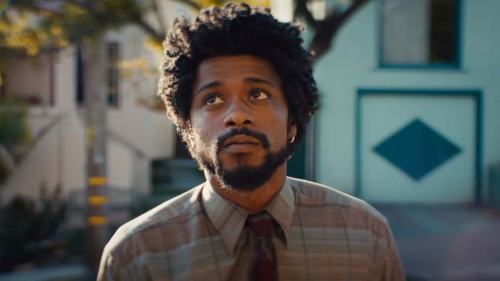 When I saw a quote on the cover of Sorry To Bother You’s DVD case proclaiming it to be “Get Out on acid” (courtesy of Dana Harris from Indiewire) I thought that was a bit of topical marketing hyperbole. Turns out it’s actually a fairly accurate assessment.

Boots Riley’s debut film tells the story of Cassius Green (Lakeith Stanfield), who finds himself quickly rising in the ranks at his new telemarketing job. As he gains more and more success it comes at the cost of his more socially-minded roots, alienating him from his union pals at the company (Jermaine Fowler and Steven Yeun) and his activist girlfriend Detroit (Tessa Thompson). He also begins to learn more about the extent of corporate greed and… well, things spiral from there.

Sorry to Bother You mines its social satire through a dystopian-esque world that is equal parts whimsical and bleak. In this version of reality, for example, citizens revel in a show called I Got the Shit Kicked Out of Me. (So in other words it’s heightened, yes, but not THAT many steps away from our current reality.) Riley recalls the work of Michel Gondry and Spike Jonze in his off-kilter, daydreamy visual innovation, lending Sorry to Bother You a bite and creativity that only strengthens the very blunt statements Riley is making.

In fact, I’d argue that there are actually a few too many ideas at play at times, muddying Riley’s otherwise clear vision. Had certain ideas or plot points been pushed further (and others done away with entirely) they could have made even more of an impact. His social commentary is vibrant and important, but it feels like he’s still figuring out the best ways to cohesively convey it.

Some reviews seem to feel that Sorry to Bother You gets a bit too, well, weird for its own good by the end. But while things certainly escalate quickly and go in unexpected directions, that’s part of the appeal of this bold film. And the fact that this got a wide release in theatres is perhaps a minor miracle. It’s an insanely ambitious first film and while it doesn’t entirely stick the landing, it works far better than it should and promises all sorts of exciting things to come.