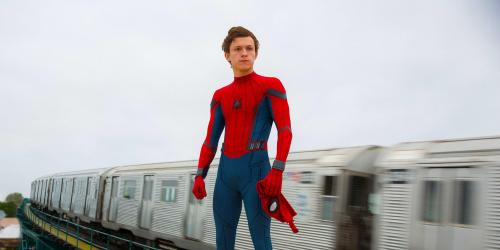 Aren’t we all sick to death of the Spider-Man origin story? You don’t need to be a comic book buff to know about the spider bite, Uncle Ben, and web-slinging. So when it was announced that the Spider-Man tale was going to be rebooted for the big screen yet again – for the third try in the past 15 years – I wouldn’t blame you if you audibly groaned. Of course, this time it was supposed to be different, because Spider-Man is now part of the Marvel Cinematic Universe. (Still don’t really understand what that means, despite having seen about a dozen of the MCU films? Join the club.) But is Spider-Man: Homecoming really a significant departure from the past iterations of the story that are so fresh in our minds? Well, yes and no.

Mercifully, director Jon Watts (Cop Car) spares us the bulk of the origin story, instead joining Peter Parker (Tom Holland) in progress as Spidey. After getting a taste of the superhero life with the work he did in Captain America: Civil War, we now see him honing his skills. Itching to don the superhero suit at any opportunity and bumbling his way through stopping small-time crime, Peter is really just waiting for Tony Stark and the rest of the Avengers to call him up for the next mission. At the same time, being just 15 years old, Peter still has to navigate high school, which to him now seems like a total snooze in comparison. However, it’s not all bad, since he has best buddy Ned (Jacob Batalon) and crush Liz (Laura Harrier) to help occupy his time.

This sets the scene for Spider-Man: Homecoming, and I was actually pleasantly surprised to see how much of the film focuses on the process of Peter coming into his own, both as a superhero and as a teenager. Nowhere to be found is the flashy, perfect badassery of the Avengers crew. Instead, Peter fumbles and gets in over his head, sometimes inadvertently causing more trouble than he prevents. He’s obviously got a lot of heart and skill, but he’s still finding his footing, and Spider-Man: Homecoming works best when it navigates that uncomfortable in-between phase – even down to the touch of showing the awkward process of trying to change from street clothes to a full-blown superhero costume in public. Superhero movies often struggle with humanizing their heroes without either making them seem weak or going the satirical route, a la something like Deadpool. Here, by contrast, I felt more invested in the character because he actually seemed fallible, and we get to see so many of his less glamorous moments.

This added dose of humanity also comes partly thanks to Holland, who balances the many character demands of Peter Parker. Charming and quick-witted, Holland can also bring a vulnerability that is refreshing to see in the MCU. This is underscored during a particular moment during the film’s climax, which (without heading into spoiler territory) finds Peter at an extreme low point. Holland plays the moment perfectly, as well as true to Peter’s age, and I also applaud Marvel for showing their protagonist react in an unexpected way that we haven’t necessarily seen in an MCU film before.

Despite these strengths, the film has its weaknesses, especially when wading into its big action set pieces. The action is just lacking the flow or even the comprehensibility seen in many other films of its ilk. For example, there is a sequence that takes place on the Staten Island Ferry that should have come across as inventive and exciting, but instead it becomes overly complicated trying to figure out the geography of where certain characters are. With some exceptions, many of the film’s big “action” moments lose their punch thanks to sub-par direction. This is perhaps the most compelling argument as to why Marvel should have invested in a director with more of a resume.

Fortunately, I guess, the film doesn’t overly rely on action to tell its story, and it has other strong aspects working in its favour, including the fact that they scored Michael Keaton to play a villain who actually has some substance. As well, the film’s humour and slightly shaggier feel make it feel like both a breath of fresh air, and like a film that could easily appeal to younger audiences in addition to the adult fanboys who have been breathlessly following the MCU from the start.

Those looking for a film to reinvent the superhero wheel won’t find it in Spider-Man: Homecoming, as it does for the most part tow the Marvel line. But by featuring such a youthful protagonist and focussing more on his struggles than his victories, this is a film with more heart than many of us have come to expect from the subgenre. While feeling oddly slight in some ways, Spider-Man homecoming is still a middle-of-the-pack entry in the MCU and makes for pleasant summer viewing at the multiplex.

One response to “Review: Spider-Man: Homecoming”