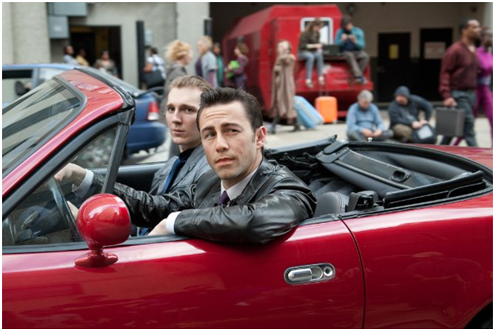 Is Joseph Gordon-Levitt a movie star? The folks in Hollywood certainly seem to think so. After leading indie films like (500) Days of Summer and 50/50 to wider success, Levitt has received key supporting roles in big movies like The Dark Knight Rises and the upcoming Lincoln. But while his latest film, Looper, may not have Christopher Nolan or Steven Spielberg at the helm, it can certainly still be classified as a bona fide blockbuster action flick for the young actor to headline.

And while he may not be as big of a name, writer-director Rian Johnson has proven his clout as a director with smaller movies like 2005’s Brick and 2008’s The Brothers Bloom. So when film geeks found out that he and Levitt (who also starred in Brick) were teaming up again with a bigger budget and a sci-fi plot, the excitement was palpable. And, as it turns out, that excitement was absolutely warranted. Looper is the kind of bold, grand Hollywood blockbuster that critics constantly hope for, but only see once or twice a year. It has a brain in its head and an artistic sparkle in its eye. And, quite simply, it’s the best movie of 2012, so far.

Levitt plays Joe, a wayward assassin living in the year 2044. Being a “looper”, his job is to kill rival gangsters sent back from the future. Thirty years beyond Joe’s time, time travel has been invented and it has also become impossible to dispose of dead bodies (hence why they’re sent back to Joe’s time for removal). But, of course, there is a catch: for the sake of simplicity, loopers are eventually sent their future selves to kill (thus completing the “loop”). When Joe’s future self (played by Bruce Willis) decides to fight back against his seemingly inevitable end, this sends young Joe into a race against time, the mob, and (quite literally) himself.

At its heart, Looper is a sci-fi blockbuster. However, despite featuring a gun-toting Bruce Willis, it actually goes fairly light on the shoot-’em-up action. Don’t get me wrong – there are enough chases and blood splatters to satisfy those looking for a high-octane thriller. But for audience members looking for a little more depth, it also offers some surprisingly complex moral questions, unique character development, and delicate artistry. Rian Johnson applies his stylized visuals perfectly to a bigger scope, but he also doesn’t lose the intimacy that made the hard-boiled Brick crackle with such electricity.

Joe is an undeniably complex protagonist. In many ways, he is despicable. But while he’s hedonistic and ruthless, he is not without remorse. And by juxtaposing him against his even more morally complex future self (Willis), it highlights the emotional toll that his lifestyle has hit him with. As does young Joe’s unique relationship with a young single mother, Sarah (Emily Blunt), who he meets while tracking his future self. While some might argue that the film takes a slower turn once Joe meets Sarah and her son, the tenuous, frayed bonds that are revealed between that trio of characters offers the film its emotional heft. Blunt, especially, shines as the strong but vulnerable Sarah, and it’s largely her nimble performance that gives the film’s finale such a punch.

And speaking of emotion, it’s easy to get swept up in the film’s beauty. Johnson creates an expansive, slightly off-kilter dystopic world that is bleakly stunning. Something as simple as a shot of a skyline or a cornfield drips with such melancholy that it’s nearly overwhelming. It’s hard to pin down what it is about Johnson’s anti-Americana vision that works so well, but somehow Looper comes out feeling like a grade-A Important Film because of it.

This is not a perfect film. While Joe, Sarah, and her son are interesting characters, other supporting players (especially those played by Piper Perabo and Noah Segan) seem to get discarded part way through, and never fulfill their potential to be impactful. A few plot twists feel overly convenient and ultimately pointless. However, for the most part, Johnson has created a well-structured, thoroughly engrossing blockbuster. At two hours long, it never drags, and I was happy to let myself be pulled along for the ride. While watching it, I almost forgot that it was a sci-fi movie where people fly around on hovering motorcycles. It just felt like a rich drama that I wanted to see more of. And if you ask me, that’s one of the biggest compliments that I can give to a film. Looper is the rare blockbuster that can knock you back with its visual flare and still stay on your mind long after the credits roll.