You know all of those “most anticipated” lists that are out around this time? And you know how they all just have the year’s biggest blockbusters (Thor, Transformers 3, etc.) in varying order? Well, this list is different. It’s a mix of all different genres and sizes of movies (yes, including some blockbusters). I always find it interesting to look back at the movies that I was excited about. Because all it takes is a bad trailer and/or poor reviews to make me completely lose interest a lot of the time. So here’s a look at 50 films in 2011 that I’m excited for, in a very rough order.

The plot description is vague (something about a loss of innocence), but the trailer suggests that artistry takes precedence over plot. Director Terrence Malick (whose past films include The New World, Badlands, and The Thin Red Line) takes his time to make meditative films, and hopefully it will be worth the wait.

Cast: Matt Damon, Kate Winslet, Marion Cotillard, Jude Law, Gwyneth Paltrow, Laurence Fishburne, John Hawkes, Demetri Martin, Bryan Cranston, Elliott Gould You can’t argue with that cast. The sci-fi storyline about scientists stopping a killer virus may not lend itself to such A-list star power, but with Soderbergh at the helm, it’s bound to be a cut above the usual genre fair.

This long-gestating adaptation of Jack Kerouac’s famous novel has a top-notch cast with some of my personal favourite current actors. Adapting such a huge book is always a challenge, but if they can pull it off, this could be a hugely popular film.

I love Jason Reitman as a director, and I love him even more when he teams up with screenwriter Diablo Cody. Charlize Theron stars as a divorced writer hoping to reconnect with a now married old flame (I’m guessing that’s Patrick Wilson’s character?). Even with that vague plot, the names attached make me thing that this might be a romantic dramedy that’s actually good. 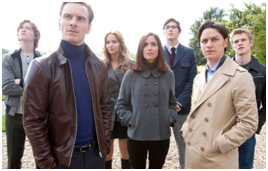 What is with the amazing casts this year? Hopefully they don’t disappoint, as these monster casts sometimes do (hi, Nine!). I could see this one going either way, but Matthew Vaughan (Kick-Ass) is a fun director, and with the actors attached, I’m sure I’ll enjoy it on some level. The trailer looks like promising, if not fairly standard, superhero fare.

It earned strong reviews at TIFF, and Max Winkler’s directorial debut looks like a charming and funny coming-of-age tale. Angarano and Thompson have been deserving of a breakthrough role for years, and even if this isn’t the vehicle to rocket them to the big time, it’s refreshing to see some of Hollywood’s truly talented young actors get a chance to show off their acting chops.

McGregor is always a joy to watch on screen, and it’s an added bonus when his movies are actually good. His career seems to be on the upswing again, and this modest little story about a man dealing with his father’s late-life coming out looks like charming fun, with a dollop of melancholy.

I would be slightly dubious about the “quirky” plot (“a terminally ill teenage girl who falls for a boy who likes to attend funerals”) if it wasn’t in such good hands. From his big-name fare (Good Will Hunting, Milk) to his artiest, least comprehensible work (Paranoid Park) Gus Van Sant is always an interesting director. The trailer makes it look like one of his more mainstream efforts, but Restless also appears to have Van Sant’s unique touch that makes me very excited.

It looks like it’s going to be a big year for both Wasikowska and Fassbender, and this sweeping adaptation of the classic Charlotte Bronte novel will likely give both their careers even more of a boost. Potentially overwrought but certain to be well-shot, the best-case scenario for Jane Eyre would be something along the lines of a darker version of 2005’s Pride & Prejudice.

After a completely esoteric teaser and an only slightly more telling Superbowl spot, I still don’t really know what Super 8 is about. But I have faith in J.J. Abrams after Lost and the Star Trek reboot. Elle Fanning is a young actress who I surprisingly really like, and I loved seeing Kyle Chandler (who will always be Coach Taylor to me) being a badass in the trailer.

One response to “The Ultimate 2011 Movie Guide”